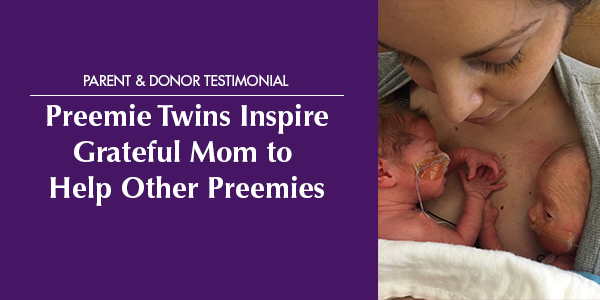 When I found out I was pregnant with twins, I was told it would be a high-risk pregnancy with a chance of preterm labor, but I never thought it would actually happen to me. My water broke at 31 weeks and I was airlifted to a hospital over 3 hours from where I live.

My twin babies, Luke and Ava, were born that day weighing 3 pounds 9 ounces each, and they stayed in the neonatal intensive care unit (NICU) for 8 weeks. It was so hard to see them hooked to breathing machines, feeding tubes, and monitors. For the first month, they had daily “breathing spells” where they would quit breathing because their little brains and bodies were just not ready to be outside the womb. They also lost weight after birth because they couldn’t tolerate milk well and got down to around 3 pounds.

I visited them every day and felt so helpless and scared sometimes. The one thing I could do for them was pump breast milk, which they received at first through a feeding tube and eventually in a bottle.

At three weeks old, my daughter had a major setback and developed necrotizing enterocolitis (NEC). This is a serious intestinal disease that is common in preemies and can be life  threatening. She was put on an intense antibiotic regimen for 3 weeks and only received nutrients through a PIC line (catheter).

After the scare, the doctors put both Ava and Luke on the Prolact+ human milk-based fortifier that was added to my breast milk to help them gain weight and get stronger. The human milk fortifier was incredibly effective in helping Ava catch up on her weight and heal after recovering from her NEC infection.  Thankfully, she recovered with no long-term problems, but she had lost quite a bit of weight and fell nearly a pound behind her brother.

Luke and Ava are now healthy 11-month-olds and weigh close to 20 pounds! I never thought I would see the day they had rolls on their little arms and legs. I am thankful to have had a great milk supply for my twins. I plan to continue breastfeeding them through at least 18 months of age – not only so they can continue to get the healthy-immune-system benefits for as long as possible, but also because Ava has a sensitive stomach and breast milk is so easy for her to digest.