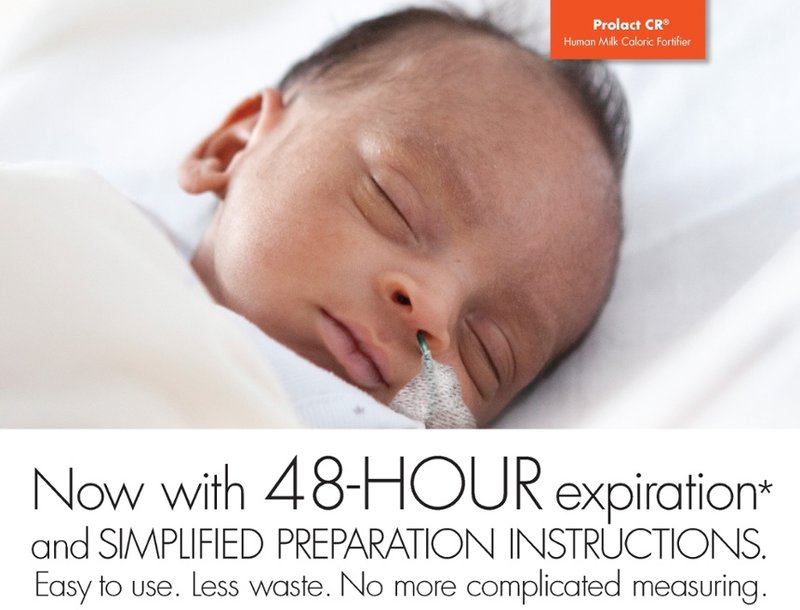 The frozen shelf-life for Prolact CR has been extended to two years, and the in-use shelf life has been doubled to 48 hours, starting when thawing begins. Prolact CR will be easier for NICU staff to use with the added benefits of simplified preparation and an increased shelf-life before and after thawing starts. Prolact CR is added to mother’s own milk or donor breast milk to provide needed calories and help premature infants achieve adequate growth without substantially increasing feeding volume.

A study published in the journal Breastfeeding Medicine found that adding Prolact CR to an exclusive human milk diet (EHMD)1 resulted in a significantly earlier postmenstrual age at discharge and a trend toward decreased length of stay for very-low-birth-weight (VLBW) infants in the NICU, when compared to infants who did not receive the Prolact CR fortifier.2 In addition, an earlier study published in The Journal of Pediatrics found that adding human milk cream to an EHMD including human milk-based human milk fortifier improved length and weight velocities of VLBW infants.3

“Proven as a safe and effective caloric fortifier to boost growth in preemies, Prolact CR remains the only caloric fortifier made from 100 percent donor human milk cream, instead of cow milk,” said Prolacta Bioscience President and CEO Scott Elster. “We are pleased to increase the product’s frozen and post-thaw shelf-life, and to facilitate simplified use of Prolact CR for the healthcare providers on the front lines as they care for fragile premature infants in the NICU.”