The story of Kinsley and Gracelyn, as told by their mom, Ashley

Prolacta - North America > Prolacta feed > The story of Kinsley and Gracelyn, as told by their mom, Ashley 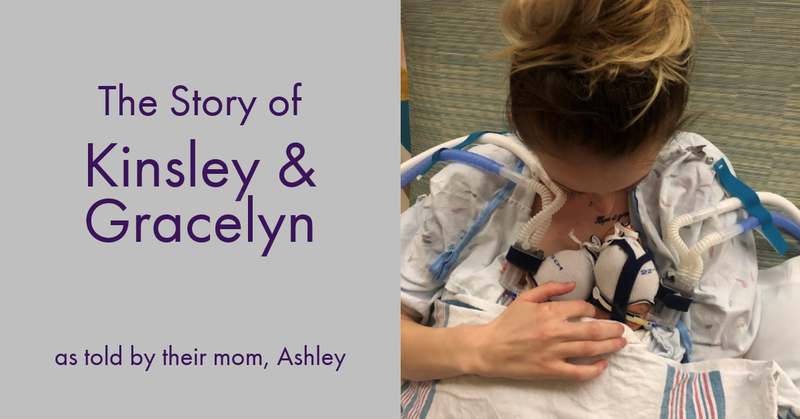 I was in shock the day I learned I was pregnant. I’d always wanted to start a family, but the timing never seemed right. And this moment was no different. I was recently single, and that meant that I would be going through this pregnancy entirely on my own. Right away I scheduled an appointment with my OB, but the soonest they could fit me in was a month out. I was experiencing worsening nausea, and within two weeks I ended up in the emergency room for severe dehydration.

Revelations in the Emergency Room

During my visit to the emergency room, I had my first ultrasound, and it was then that I learned I was carrying not one but two babies! I wasn’t sure if I should laugh or cry at the news. Over the next few weeks, my morning sickness grew more intense, until I was vomiting more than 20 times a day.

Then came the heavy spotting.

I was rushed to the emergency room, where the doctors discovered I had a tear in my uterus, also known as a subchorionic hemorrhage. At 15 weeks pregnant, I was ordered to go home on bed rest and was placed on intravenous fluid therapy to keep my electrolytes up and my body hydrated. Within three days, I was back in this hospital with three new tears in my uterus. Again I was ordered home on bed rest and placed on fluid therapy. By this point, I had lost nearly 25 pounds, and on my petite frame, the weight loss was striking.

My twin girls were born at 28 weeks and 3 days. Kinsley Rae weighed 2 lb 11 oz, and Gracelyn Louise weighed 2 lb 6 oz. They were admitted into the NICU, where an amazing team of nurses surrounded them. I got a crash course in all things NICU and all issues related to premature babies. Both of my girls were diagnosed with chronic lung disease and anemia, and both had to have a patent ductus arteriosus ligation. Kinsley spent six weeks off and on CPAP, while Gracelyn stayed on CPAP continuously for eight weeks. Both girls underwent heart surgery on the same day. They recovered from the surgery quickly and were off ventilators by the following morning – that is, until Kinsley’s CO2 levels skyrocketed, and she had to be reintubated for a little longer.

My plan was to exclusively provide breast milk. During the first week of my babies’ birth, I was getting between 5 to 10 mL of milk per session. I felt discouraged, but I kept working at it until my milk finally came in. I pumped every two hours, and my stockpile of milk grew. The girls were fed through nasogastric intubation the entire time they were in the NICU because they had problems taking feeds by mouth.

With the girls being so small, they needed the extra calories to help them grow. I was given the option to choose between a cow milk-based fortifier and Prolacta fortifier. I discussed this with the babies’ nurse, and she explained that Prolact+H2MF fortifier was the best option to supplement my breast milk, as it was the only human milk fortifier actually made from 100% human milk! As a mom whose plan was to exclusively breastfeed, I can’t thank Prolacta enough for producing a fortifier that would allow me to provide my babies a 100% human milk diet and not confuse their little bellies with a foreign cow protein. After 94 long days, my girls were finally discharged. Kinsley weighed 7 lb, and Gracelyn weighed 6 lb 4 oz. Both girls had grown 5.25 inches in length during their time in the NICU.

Today, the girls are 4 months old and are on track to meeting the developmental milestones for their corrected age. They have strong head control, can roll over on their own, and have great vision. Watching them grow out of their preemie clothes and into newborn clothes has been such a blessing!