The story of Isabella, as told by her mom, Tiffany

Prolacta - North America > Prolacta feed > The story of Isabella, as told by her mom, Tiffany

I developed preeclampsia early on in my pregnancy. At 26 weeks, during a routine ultrasound appointment, my doctor discovered that the protein in my urine had quadrupled in just 4 days and that the baby was not growing at an ideal rate. I would need to be admitted to the hospital for monitoring. I sobbed as I walked out of the doctor’s office.

I was placed in a high-risk suite and told I could deliver at 2 hours, 2 days, 2 weeks, or 2 months. My goal was to make it to at least 28 weeks, when the baby’s chance of surviving would increase to 90%. I stayed put in my little suite with my husband by my side, only leaving for two wheelchair rides. Eventually, my body began breaking down. I was showing signs of organ distress, and the placenta wasn’t getting sufficient blood flow. The decision was made to do an emergency cesarean, a day before hitting 28 weeks. However, a last-minute ultrasound revealed that the baby was in an ideal position to be born vaginally. We celebrated! No surgery! I was taken to labor and delivery and induced. Then things quickly turned.

My platelets were dropping rapidly, and I was in a life-threatening situation. I needed to have an emergency cesarean and be placed under general anesthesia. I knew things must be grim. To put a mother under general anesthesia during a cesarean delivery is usually a last resort, as it can put the baby’s life substantially at risk. Later, I learned that I had developed stage two HELLP syndrome, a type of preeclampsia. A team of no fewer than eight nurses, doctors, and anesthesiologists swarmed around me and prepared me for surgery. Isabella Melody Montgomery was born on March 1, 2018. I was not awake for her birth, but according to her medical records, she let out a cry when she first arrived – an uncommon thing for babies born so tiny. She was born at nearly 28 weeks, but she was the size of a 24-weeker, weighing only 1 lb 7 oz and measuring 12 inches long. As I woke from surgery, I got a quick introduction to Bella before she was whisked away to the NICU (neonatal intensive care unit). Her little isolette resembled a space shuttle, and she looked like a little Martian with tubes and lines coming out of her like tentacles. I said hello, and her teeny-tiny eyes opened.

Our experience in the NICU was one of the hardest, yet most rewarding, times in our lives. My husband and I grew closer as a married couple, and we learned to rely on others. Isabella had many small issues but nothing critical, which was a miracle. She was on high-flow oxygen, CPAP, and Vapotherm Hi-VNI Technology until she was 45 days old. Like many micropreemies, Bella had the A’s & B’s of the NICU (apnea and bradycardia). She also had tachypnea, which means she had an elevated respiration rate. We were fortunate enough to be able to stay by Bella’s side day and night. We had a private room in the NICU, with our own bathroom and shower. My husband worked from home, so this flexibility enabled him to work by Bella’s side.   Bella was fed through a feeding tube up until she was 53 days old, when she was finally allowed to try her first bottle. It took her until she was 76 days old to be in an open crib and regulate her own body temperature. She was discharged at 78 days.

Unfortunately, Bella only stayed home for 3 days. She began refusing to eat and had a large aspiration event. She was readmitted to the NICU, where she stayed until she was 110 days old. So Bella graduated from the NICU twice – the first time prematurely (a joke my husband loves to make). At her second NICU graduation, Bella weighed 6 lb 11 oz and was 18 ½ inches long. 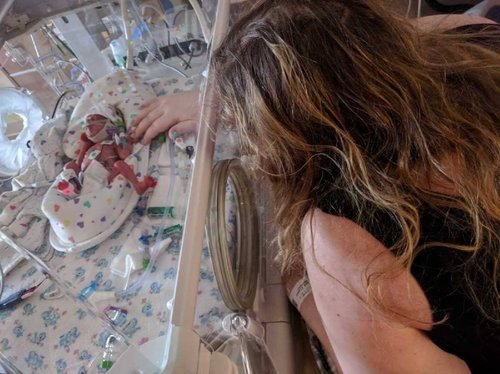 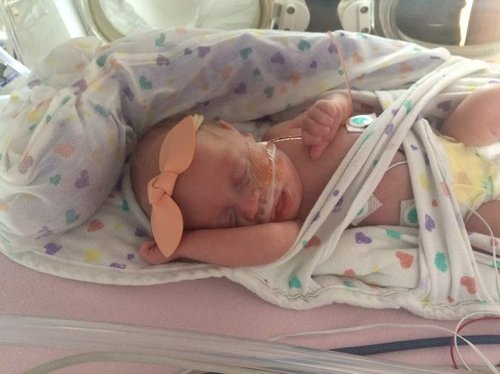 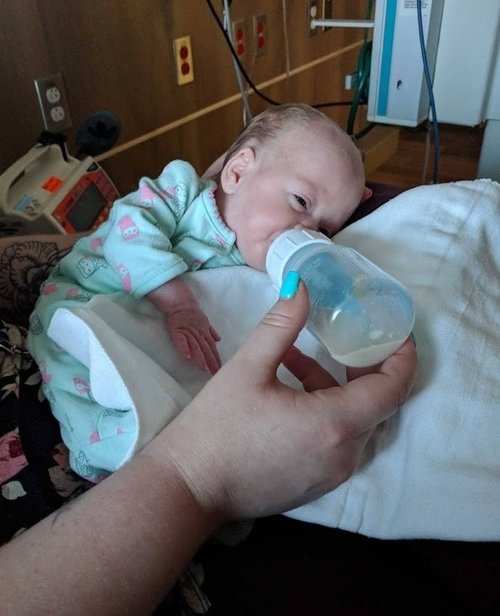 My experience feeding in the NICU was hard! My breast milk didn’t come easily, and early on my supply began to dwindle. What little breast milk I did pump was fortified with Prolacta fortifier. I was told this was to help Bella grow. I tried everything to continue to provide my breast milk – from reaching out to several lactation consultants to scouring the web for tips, but in the end nothing worked. After 42 days, my supply dried up. I was heartbroken. However, it was so important for Bella to continue to receive a 100% human milk diet during this critical time that when I couldn’t produce my own milk, the medical staff began to give Bella donor milk fortified with Prolacta fortifier. To this day, I am very grateful to the women who took the time to pump and donate their milk for babies like mine.

Today, Isabella is a little over 6 months old! She is at home and loving it! Currently, she is exclusively fed by a feeding pump through her gastrostomy tube. During her NICU stay, she had been able to bottle-feed, but she regressed after needing to be readmitted because she was experiencing silent aspiration. She developed an extreme oral aversion because she was unable to tell us she was taking on liquid in her lungs. Poor thing! Bella is right on track developmentally. She loves to be sung to and to talk and babble, cuddle, and kick her feet. Even though she has an oral aversion, she enjoys putting things in her mouth (if they aren’t a bottle or pacifier). Bella currently weighs 9 lb 11 oz.

First off, I want to say, “I’m sorry you’re going through this.” Don’t deceive yourself – this is a traumatic event. I felt extremely guilty, and it took time to realize that this wasn’t my fault. If you need to reach out for therapy, do it. I increased my anxiety medication during this time. Also, make sure to reach out and build your support system. Get to know the staff and build relationships. We made friends that will be with us forever. At 6 months old, Bella only just graduated from her NICU feeding schedule. We are finally finding our new normal, and it’s amazing. Being home is the very best thing in the world. I can finally hold my daughter without wires, and you can tell she’s at peace here. For us, we embraced our faith. We prayed a lot and trusted in Jesus. We prayed as a family. We read our Bible together. This gave us strength and still does. 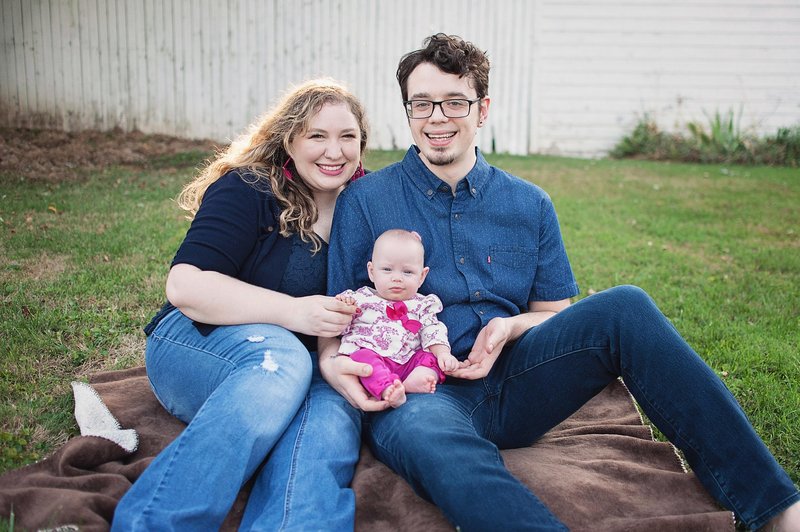