The story of Samuel, as told by his mom, Sara

Prolacta - North America > Prolacta feed > The story of Samuel, as told by his mom, Sara 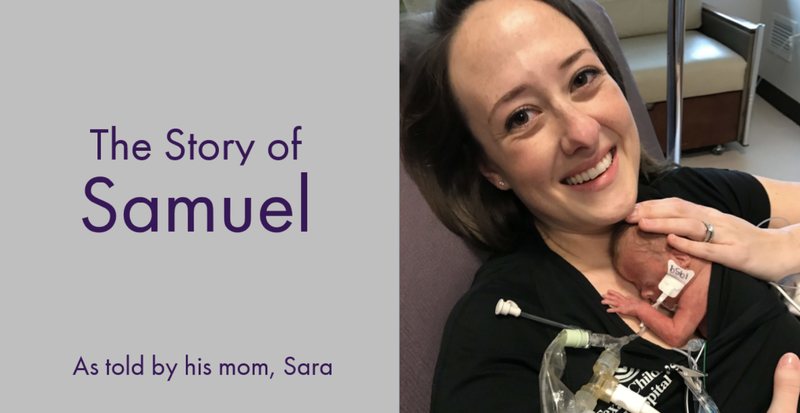 Samuel was born on January 4, 2018, at 25 weeks and 5 days’ gestation. He was born at 11:31 a.m. weighing 1 lb 4 oz. He has been a miracle from the beginning. As a couple who had struggled with miscarriages in the past, my husband and I thought we were “done” with having babies because we didn’t want to push our luck. I was 8 weeks along before we found out I was pregnant.

At 10 weeks, we did genetic testing solely to find out the gender; little did we know that our world was about to be changed forever. The results revealed that there was a high risk of Samuel having Down syndrome. The days and weeks that followed were very overwhelming for my husband and me. We went in for a 12-week ultrasound and were told by the physician that this was an unhealthy pregnancy and that there was no way our baby would make it. But in the ultrasound monitor all we could see was a baby kicking with a strong heartbeat, and we were never more confused than we were at that moment.

Thankfully, my OB referred us to a high-risk OB who was well-versed in pregnancies involving trisomy 21, the genetic mutation of babies with Down syndrome. Samuel was monitored closely. We made it to 20 weeks, and we even had a fetal echo done that showed no major heart defects, a huge plus for a baby with Down syndrome. We went in to see my OB at 23 weeks, and everything looked so good that the OB told us to come back in 4 weeks.

When I was just past 25 weeks pregnant, I noticed that Samuel was not moving as much. He was usually pretty active in the evenings. The following morning, I picked up a donut and some OJ, hoping that would perk him up. But it didn’t. I became more worried and drove myself to the OB. The next hours went by in a flash.

Samuel failed his BPP (biophysical profile) test, which showed almost no amniotic fluid present and low blood flow to the placenta. It was a miracle he was still alive. I was given fluids and my first steroid shot, but they needed to get him out. Samuel was born the following morning, eyes still fused shut and his skin translucent. It was the scariest thing I have ever seen. He was intubated right away. He ultimately spent 146 days in the NICU. He overcame respiratory failure, retinopathy of prematurity, and brain bleeds, and he received multiple blood transfusions.

I started pumping immediately after birth. In fact, I demanded my first pump be at his bedside. I continued on, and thankfully milk production was not an issue for me. But Samuel needed extra calories and nutrients because of the uphill battle he had in front of him. His medical team started fortifying his milk with Prolact+ H2MF®, the only fortifier made from 100% human milk, to give him more calories, protein, and fat, and eventually, they added Prolact CR®, a cream made from human milk, which gave him additional healthy fat to help him grow. I am so thankful that Samuel was able to receive an exclusive human milk diet because the tummies of babies born so early are so fragile. Thankfully, he never had necrotizing enterocolitis (NEC), a common and serious intestinal disease that preemies can get. He grew well on Prolacta products, so much so that I was actually sad when they had to stop giving them to him! Samuel weighed 8 lb 3 oz when he went home!