The story of the Moore triplets, as told by their mom, Veronica

Prolacta - North America > Prolacta feed > The story of the Moore triplets, as told by their mom, Veronica 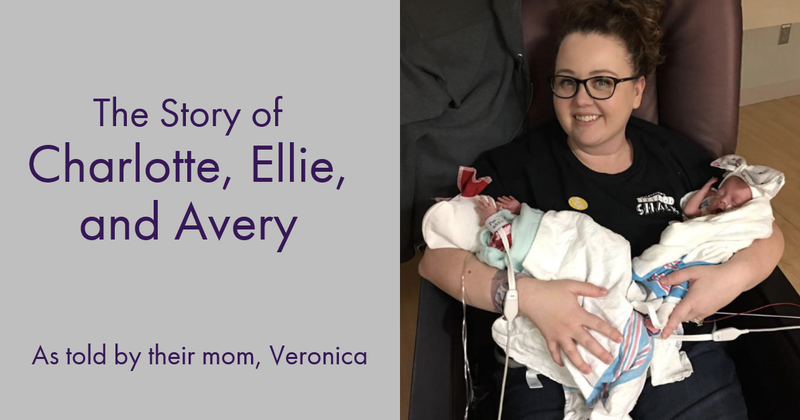 My husband and I tried to conceive for 5 years. After several rounds of IVF and much heartache and disappointment, we finally got the news we’d been waiting for – two of my embryos had successfully implanted! One of the two eggs split, which meant that instead of two babies, we would be expecting triplets.

My pregnancy was considered high risk because of my advanced maternal age, 36, and the fact that I was carrying multiples. Throughout the first trimester and into my second, I had weekly ultrasounds to monitor my cervix, which had been deemed incompetent (weak). By week 20 of my pregnancy, we noticed that my cervix had softened to the point that my doctor thought it might be open.

It was also discovered that one of the babies was considerably smaller than the other two and that blood was not flowing normally through her cord. I was put on immediate bed rest at home, and by week 22, I was admitted to the hospital, where I would stay until I delivered the girls. While I was on hospital bedrest, my husband and I were approached by the neonatal perinatal medicine specialist to discuss a resuscitation plan for the girls, should it be necessary.

That was an extremely hard conversation to have. Five weeks into my bedrest, one of the babies began showing signs of reverse blood flow in her cord, and by the end of the following week, her heart rate was decelerating over and over again during my nonstress test. It became clear that if we didn't want to lose her, I had to deliver right away.

Our girls arrived at 28 weeks’ gestation, via emergency C-section. We welcomed Avery Monroe first at 2:57 a.m., then Charlotte Mackenzie at 2:59 a.m., with Ellie Madison following right behind her at 3:01 a.m. Ellie and Charlotte are 100% identical, while Avery is a fraternal sibling. Avery and Ellie both weighed in at a whopping 1 lb 15 oz each, while my Charlotte, who had been severely growth restricted in my womb, weighed only 1 lb 1 oz. All three girls came out pink and crying, which was a miracle, and the NICU team immediately went to work to save our daughters’ lives. 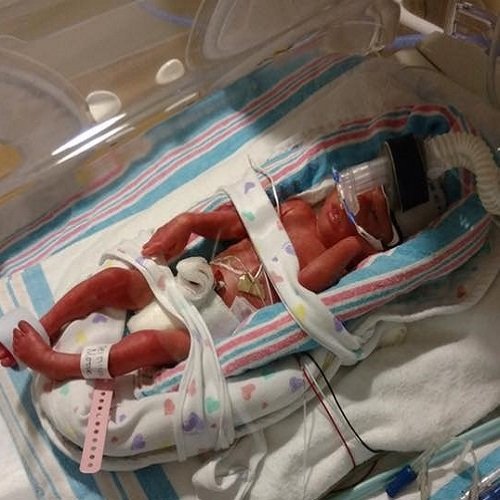 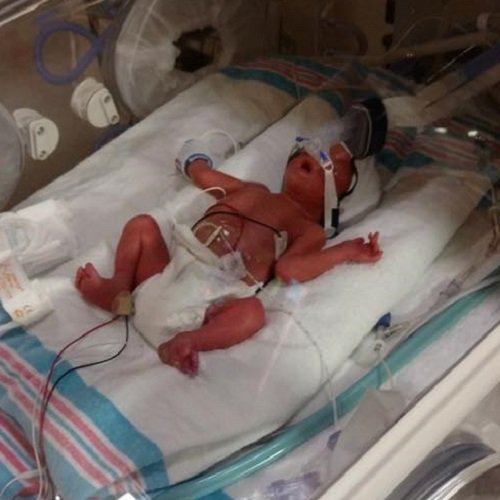 I saw my girls for just a second before they were wheeled away to the neonatal intensive care unit (NICU) and then again briefly after I was transferred to my new hospital room. All three girls were breathing with the help of ventilators. Avery and Ellie were on bubble CPAP, while Charlotte was intubated and on a jet ventilator.

While Avery and Ellie suffered only the typical preemie complications, Charlotte’s journey was unfortunately not as easy. She was considered critical and had trouble maintaining her blood pressure. She had maxed out on two blood pressure medications within the first 24 hours of her life and required a blood transfusion. At 2 weeks old, her medical care team thought Charlotte may have necrotizing enterocolitis (NEC) because her belly was extended and dark in color, but luckily she did not. Charlotte did, however, develop hydrocephalus by week 2 of life, which showed up as a grade 3 brain bleed on the right side of her brain and a grade 4 bleed on the left side.

Like most micropreemies, my girls were not able to feed right away because their stomachs were not ready to receive milk. Instead, they were given microlipids via an IV for the first few days of their lives. During this time, I was pumping and supplying the NICU with my breast milk to swab their mouths with. We were approached by the NICU dietitian who spoke to us about adding Prolacta fortifier to my breast milk. She mentioned that the hospital had just gotten approval to use Prolacta fortifier and that my girls would be the first babies to receive it. She explained that unlike other fortifiers, which were made from cow’s milk, Prolact+ H2MF fortifier was made from human milk and would be easier on their stomachs and reduce their risk of developing necrotizing enterocolitis and other health complications.. They asked for my consent, and of course I agreed – who would not want their baby to get the best nutrition possible!

Charlotte did not get to start feeding when the other girls did because of the medications she was on. However, once we were able to introduce Prolacta fortifier to her feeds, she went from weighing 1 lb 1 oz to 1 lb 12 oz within a 2-week period! When Charlotte reached this target weight, she was transferred to a nearby NICU to undergo surgery for her hydrocephalus. The new NICU did not use Prolacta products, which was a bit of a disappointment because I could see how well the girls were growing on it.

I was able to pump and supply my girls with breast milk until they were 4 months old. After those 4 months, I did have to start supplementing with formula because my supply had gone down drastically and finding time to pump for three babies was wearing me down. Also, traveling between two hospitals 7 days a week to visit all my girls wasn't helping.

Graduation from the NICU

After an 8-week NICU stay, Ellie was the first of her sisters to graduate from the NICU and come home. She weighed 4 lb 5 oz. A week later, Avery graduated and was able to come home, too. She was bigger than Ellie and weighed 5 lb 3 oz at discharge. I'm glad they let us take home one baby at a time because when we introduced Avery into our routine, we were so not ready. It wasn't until 5 months later and a NICU stay of 193 days that we were able to bring Charlotte home. She weighed 10 lb 5 oz at discharge. She had an extended stay because she needed a reservoir and eventually a shunt for her hydrocephalus. She came home on oxygen because she had pulmonary hypertension and chronic lung disease, but we are now happy to report that we have recently been given the "ok" by her cardiologist to start weaning her off oxygen, and she is showing no signs of pulmonary hypertension. 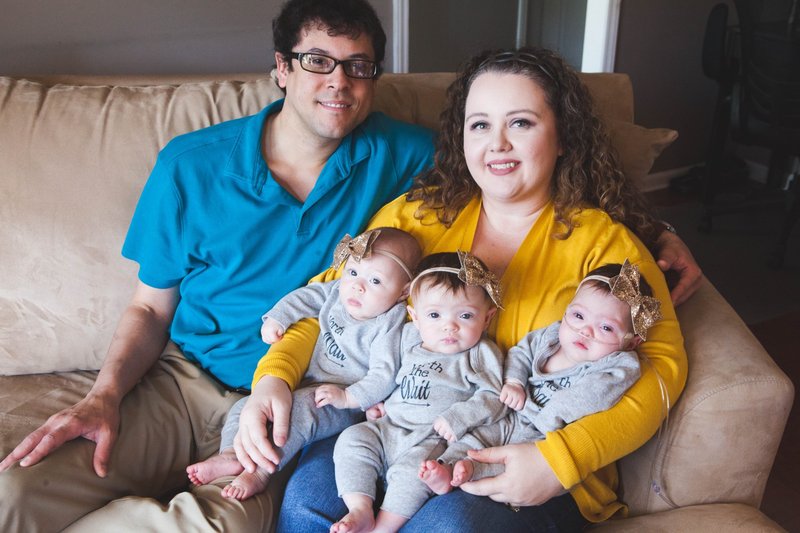 Since being home, Avery and Ellie are right in line developmentally with their actual age of 7 months, rather than their adjusted age of 4 months. Charlotte is catching up now that she is home and has her sisters to compete with. Avery and Ellie can both roll independently, while Charlotte still needs some assistance.

All three have also found their voices, and boy, are those voices loud and demanding at times! I weighed the girls recently, and Avery is at 14 lb, Ellie is almost at 12 lb, and little Charlotte, having lost a little weight, is holding tight at 10 lb. Now that we are all at home, the girls get to do lots of activities together.

They love their play mats, especially the one with a piano at the end that they can kick. They also enjoy having mommy read to them. I think that’s because I do all the voices of the characters! Our favorite book at the moment is Chicka Chicka Boom Boom.

Because of my pregnancy complications and carrying multiples, I knew early on that my girls were going to be premature and that I would be a NICU mom. What I didn't know was how long I’d be a NICU mom and how emotional it was going to be.

My advice to parents who find themselves in a situation like ours  is to talk to someone. I don’t necessarily mean speaking with a therapist, but possibly to other NICU parents. Being a NICU parent can sometimes feel lonely, especially when your friends and family don't understand. They don't know what it's like not to get to take your baby home after you leave the hospital. They don't know what it feels like to get good news one day and then to have that hope ripped right out from under you the next.

A NICU nurse once told me that the NICU is like a roller coaster, and she was 100% correct. Also, don't be afraid to stand your ground with family. Our babies are still fragile even after discharge. Don't be afraid to tell your family "no" when they ask to come visit.

When my babies came home, family and friends had to look at them through our screen door. I waited until 3 months after our first baby came home before I took my girls out of the house to visit my parents. I also didn't allow anyone to see our girls in the NICU. It was just their dad and I there. Oh, and my last piece of advice is to figure out how to buy hand sanitizer in bulk – because you will need it!