The story of Zoe, Ellis, and Adam, as told by their mom, Allison

Prolacta - North America > Prolacta feed > The story of Zoe, Ellis, and Adam, as told by their mom, Allison

When we found out we were expecting triplets, we were shocked! Overjoyed, but shocked! I knew a multiple pregnancy came with risks, but I was healthy, and my doctor seemed confident I could carry them to at least 34 weeks. Other than the constant morning sickness, my pregnancy was going smoothly – that is, until I reached 23 weeks and 3 days and started experiencing contractions. I told myself they were probably just Braxton Hicks contractions and tried not to worry. But as my contractions grew stronger and more constant, I finally relented to my husband’s insistence that we go to the hospital. And I’m glad I did! I was indeed in labor, and my obstetrician quickly had me transferred to a hospital an hour and a half away that was experienced in caring for micropreemies. I was placed on bed rest and given steroid injections to help the babies’ lungs develop and a magnesium drip for 48 hours. A week later, my contractions returned, and this time the doctor told me that I’d be meeting my babies within the day. On January 5, 2018, my babies were delivered one minute apart: Zoe at 10:37 p.m., Ellis at 10:38 p.m., and Adam at 10:39 p.m. They were born at just 24 weeks and 3 days’ gestation. Zoe and Adam weighed 1 lb 5 oz each, and Ellis weighed 1 lb 8 oz. 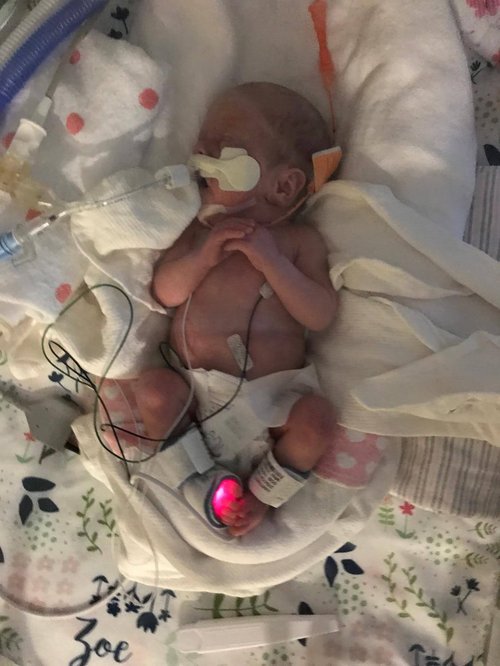 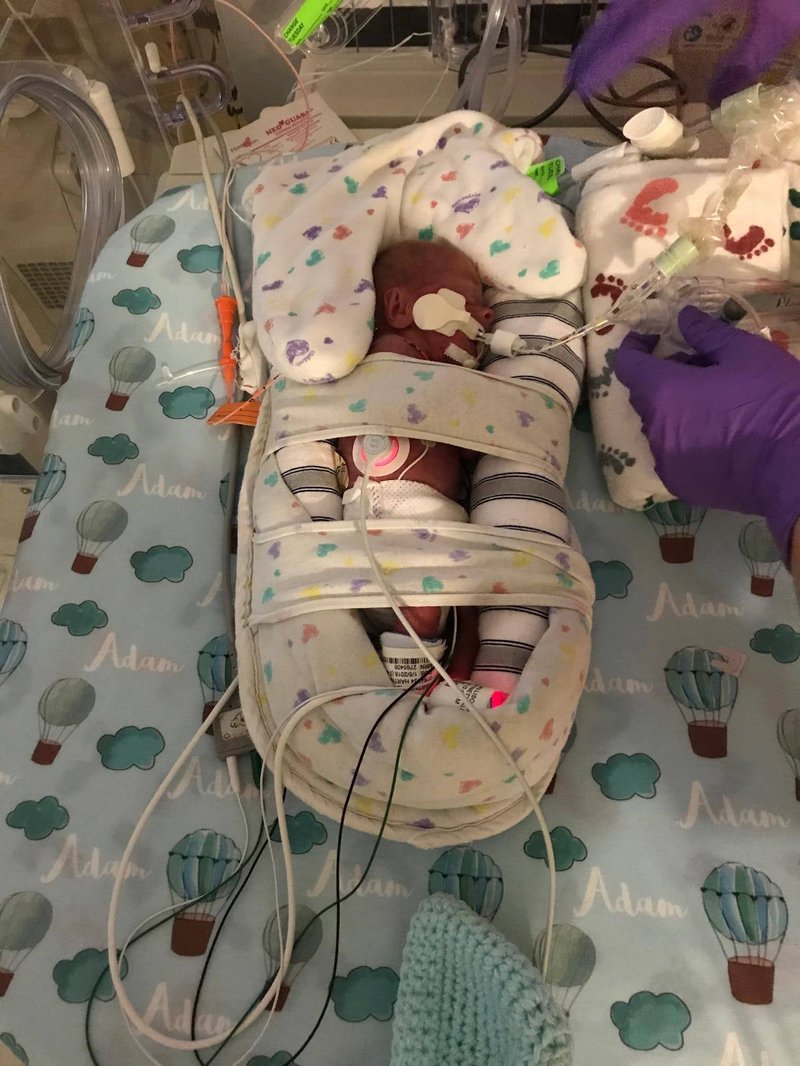 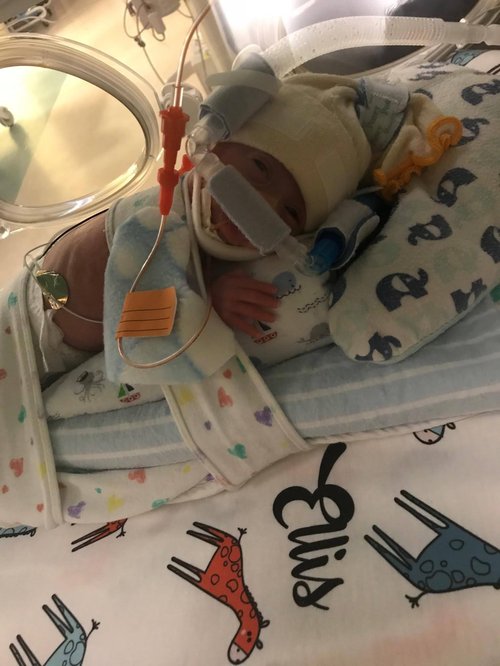 Soon after the cesarean section, my vitals dropped, and I blacked out.  I wouldn’t see my babies until the following day. Upon seeing their tiny underdeveloped bodies, I was terrified, but I also felt an odd sense of peace, and I knew only God can give peace like that.

We were fortunate enough to be able to stay at a Ronald McDonald House across the street from the neonatal intensive care unit (NICU). I sat by my babies’ bedsides daily, and I made sure to communicate with their medical team and to participate in their care as often as I could.  It was certainly the hardest thing I have ever experienced, but we found joy in watching them grow. 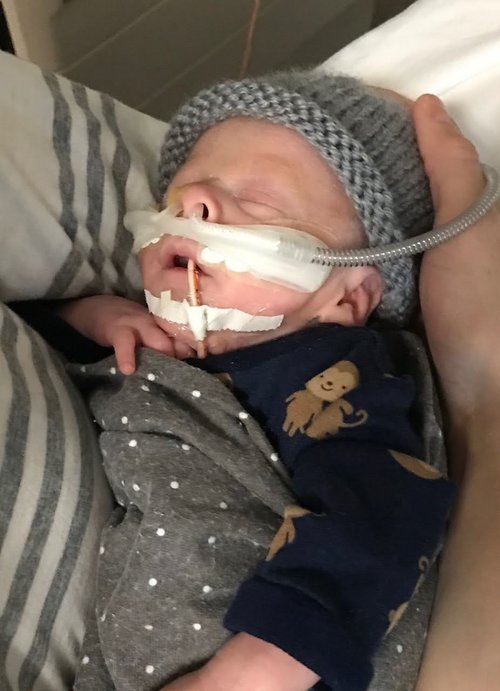 During their NICU stay, all three babies had patent ductus arteriosus (PDA), a heart problem that involves abnormal blood flow resulting from an opening between two major blood vessels that lead from the heart. Luckily, they all responded well to the Tylenol treatment and didn’t need more drastic intervention. All three also had blood transfusions, but Adam had so many transfusions that I lost count. At just a couple of weeks old, he developed a very serious E. coli bloodstream infection stemming from a urinary tract infection (UTI). I prepared for the worst, but his care team acted quickly, and with antibiotics he overcame the infection. However, baby Adam ended up having two more E. coli UTIs, but luckily he recovered. Adam was also diagnosed with retinopathy of prematurity, and thankfully the Avastin injections he received worked well. Zoe developed one bloodstream infection, which was caught quickly, and she responded well to antibiotics. She is also the baby with the worst chronic lung disease, which we suspect is because her amniotic sac was bulging through my cervix for several days prior to the triplets’ delivery. She was on multiple types of ventilation and was the last one to come off of the ventilator. I am amazed that she didn’t need any type of breathing treatments coming home, other than a minuscule amount of oxygen, which she no longer uses! Ellis was known for being “chill.”  He had the smoothest NICU stay, if there is such a thing. He did have one UTI as we were getting ready for him to be discharged, so his graduation was pushed back a week, but we were glad that the infection was caught before he was home!

I immediately began pumping the day after the delivery.    I was determined to breastfeed from the beginning, but I was unsure what my milk production would be like with such an early delivery. With the help of some fantastic lactation consultants, my milk did come in, and I was able to exclusively pump and provide all three babies with my breast milk for almost four months. As soon as they could be fed milk

through their feeding tubes, we were introduced to

. This fortifier is made from 100% donor milk. All other fortifiers are made from cow milk. It was added to my breast milk to give my babies the extra calories and nutrients they desperately needed during this critical time, while being gentle on their stomach. I am so thankful for Prolacta, and I know it helped play a vital role in my babies’ success.

Ellis graduated on day 108, and Zoe and Adam were discharged on day 116. I can’t remember their exact weights from that day, but they were all around 6 to 7 lb. Today, they are thriving 8-month-olds! Ellis has been the leader among the three for meeting milestones first!  He was the first to roll over (and now we can’t keep him still!), with the other two recently following suit! We have early intervention coming to the house to help us learn how to help our babies reach milestones. So far they are on target for their adjusted age of 4.5 months, maybe even ahead! Ellis loves rolling and playing on his activity gym and chewing on his fingers! Zoe is very attentive and watches the adults intently when they’re in conversation. She also throws in her two cents! She discovered TV and cartoons and would watch them all day if she could! Adam craves attention the most and loves to “walk” up our chests. Maybe he will be our marathon runner one day! 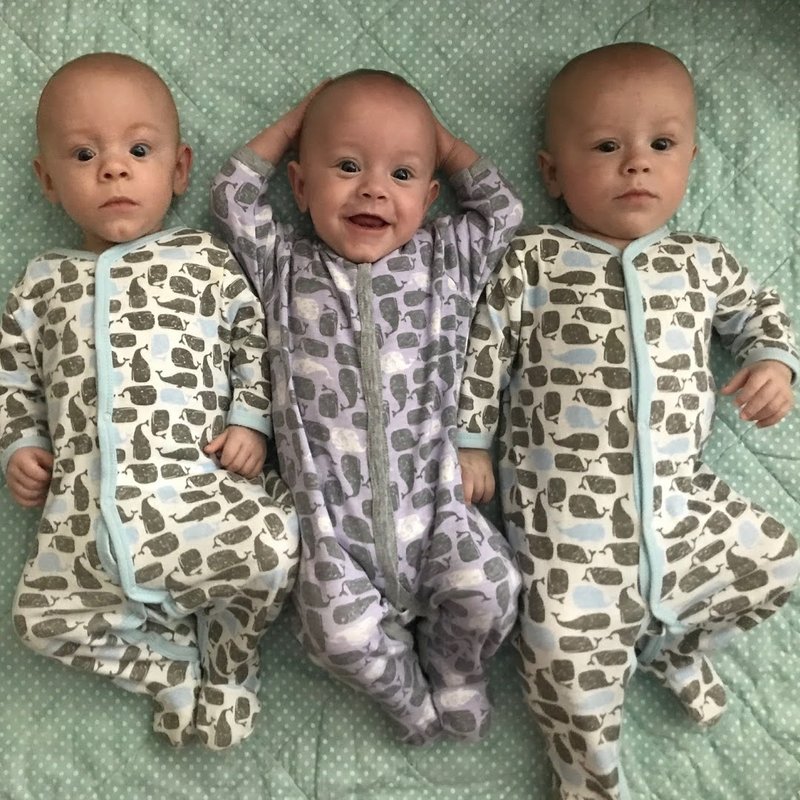