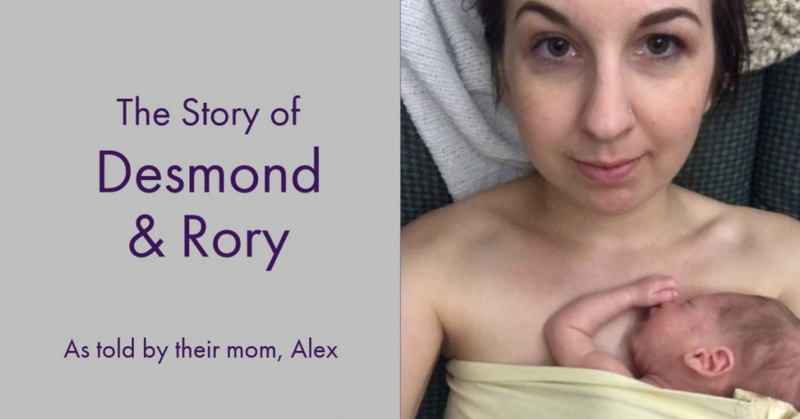 My husband and I have two sons, Desmond and Rory, both of whom started life in the neonatal intensive care unit (NICU). Desmond, our oldest, was born at 29 weeks and 2 days and spent his first three months of life in the NICU. The pregnancy leading up to his birth was anything but easy.

My first anatomy scan showed that I had a cervical insufficiency (CI). At 21 weeks, I was prescribed bed rest at home but ended up in and out of the hospital a number of times because of early contractions. When he was finally born, Desmond weighed just 2 lb 14 oz.

Desmond’s first few weeks in the neonatal intensive care unit (NICU) went smoothly – he was on a ventilator for few days, on CPAP for a week, and was then successfully weaned off the respiratory therapy.  I was able to pump and provide my breast milk. He tolerated his feeds well and worked up to full feeds at a careful, but normal, pace. It wasn’t until his first brain ultrasound at 1 week of age that my husband and I got our first real scare.

The scan revealed a grade 3 brain bleed and hydrocephalus. We learned about this the day before his baby shower, and I spent the entire shower scared and trying to hold back tears. A shunt had to be placed in his brain to relieve the pressure, and even though he was recovering well, we worried about the long-term damage he may have suffered, which could put him at high risk of cerebral palsy and other neurodevelopmental complications.

Then Desmond developed necrotizing enterocolitis (NEC) – one of the most common and serious intestinal diseases among preemies. This was when our focus shifted from worrying about his long-term health to worrying about his immediate survival. On Christmas Eve morning (the first time I’d gone home to sleep since he’d taken ill), his bowel perforated. He was whisked off to emergency surgery to remove the necrotic bowel. But after his surgery, he just wasn’t recovering well. He was bleeding internally, and he was rushed back into surgery. Later, we found out that Desmond had received human milk fortifier (HMF) made from cow milk before he was diagnosed with NEC. Desmond had a long and difficult recovery.

The Second Time Around

My husband and I waited the recommended 2 years before trying for another baby. In that time, we talked with doctors and ran tests to see if we could pinpoint why I’d had Desmond early. Was it the CI? Was it somehow connected to the kidney removal and abdominal radiation that I had almost 25 years ago? Ultimately, the doctors determined it was likely just CI and that suturing my cervix (prophylactic cerclage) and getting progesterone shots would help prevent preterm labor with our next pregnancy.

In contrast to my pregnancy with Desmond, the first half of my pregnancy with Rory was mostly uneventful. I got my cerclage, and my progesterone shots were working. But at 16 weeks, I began having crippling abdominal pain. The pain was so bad that I had a difficult time getting up from a sitting position, and I resorted to crawling on the floor to get around! At 29 weeks and 2 days, the same day that my water broke with Desmond, I started vomiting uncontrollably.

The doctors ran tests and discovered that I had a bowel obstruction caused by scar tissue that had formed after my kidney removal years ago. I was immediately hospitalized, and a suction tube was placed down my nose. I could not eat or drink and had to receive nutrition intravenously. As soon as I realized this baby would also come early, the first questions I asked the neonatologist were “Do you use Prolacta, and do you have donor milk?” After Desmond’s bout with NEC, I became obsessed with learning how to prevent it and the best treatment options for it.

My research uncovered evidence that preemies who were fed an all-human-milk diet were less likely to develop NEC. I also learned that there was only one fortifier available to babies in the NICU that was made from 100% human milk – and that was Prolact+ H2MF. All others were made from cow milk. I was relieved when the doctor told me that Rory’s NICU offered Prolacta fortifier. I wanted my baby to have it. 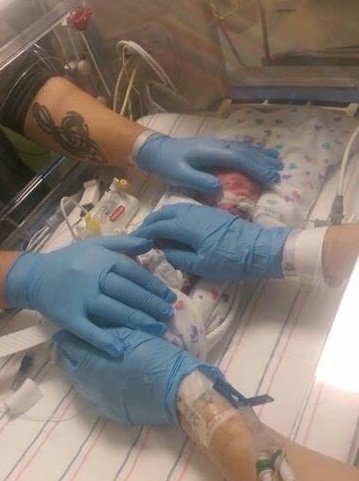 At 31 weeks, Rory was born, weighing 3 lb. My uterus had ruptured, and Rory had been sitting behind it in his sac. During the C section, the doctors ended up removing my uterus because of all the scar tissue that encased it. It was just destroyed from radiation, rupture, and the placenta being too deeply attached to my uterine wall. While Rory’s NICU stay was far easier than Desmond’s, I was still hypervigilant about preventing him from developing NEC. With every gastric residual he had, I would panic, thinking it was NEC. I hated it when his feeding increased.  But I felt more at ease than I had with Desmond’s NICU stay, knowing that Rory was getting a 100% human milk diet with Prolacta, and thereby minimizing his chances of getting NEC.

Rory spent 40 days in the NICU, and I’m so grateful that he didn’t get NEC. He came home weighing just over 5 lb. He’s starting to sit up unassisted for 10 to 15 seconds at a time, and he’s rolling in both directions, just as a baby his corrected age would do! He’s incredibly strong and determined to keep up with his older brother. The difference between the two boys is really astounding. Desmond was born tiny and stayed tiny, and he had physical therapy for a long time because of his core weakness. NEC is just such a huge thing to overcome. 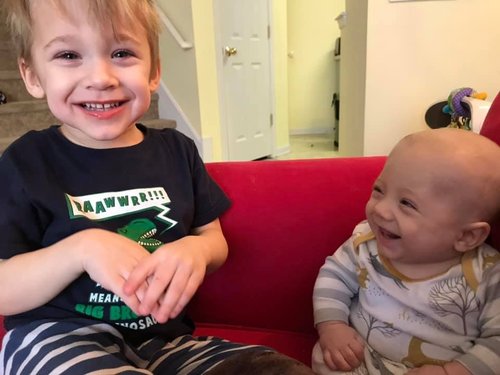 Make friends with everyone in the unit. They’ll be your community for your stay. It’s much easier to go in every day if you’re going in to spend time enjoying your baby with friends. Attend rounds every day and ask every question you can think of. It’s always okay to ask. Be your baby’s advocate. During Rory’s stay, we had a particular nurse who decided I could only hold him for an hour at a time. I scheduled a meeting with the nurse manager and the social worker and brought piles of data on the benefits of kangaroo care. I just knew that if he could be held, then it was important that I got the chance to do it. It felt a bit weird to butt heads over my baby’s care, but I’m so glad I advocated for him!