Prolacta > News > The story of Eli, as told by his mom, Paloma

From Feet the Size of Nickels to a Thriving Baby

Back in March of 2022, Paloma went in for a routine ultrasound where everything appeared normal. Little did she know, that hours later her water would break. When she arrived at the hospital, she was told that because she was just 22 weeks and 1 day, her son was not viable.

“Those words echoed through me, and I prayed for strength. After meeting with doctors we were transferred to a different room where the plan was to keep our precious baby boy in for as long as possible,” says Paloma. 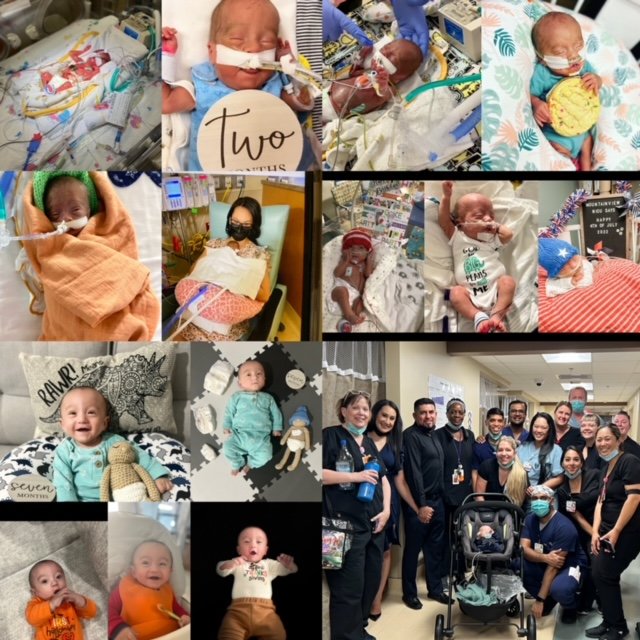 Eli James had his own plans and made a dramatic entrance into the world March 20, 2022 at 11:04pm. While the medical team was waiting outside the room, he decided to come out on the bed without help.

Weighing just 550 grams (1lb 3oz) and measuring 11 ¾ inches long, he was born a fighter. Just as quickly as he entered this word, he was whisked away to the neonatal intensive care unit (NICU).

Once Paloma was stabilized, the Neonatologist came back to speak with her. He told her that her breast milk would be essential, and should she not produce, her husband Eliesar signed a consent for donor milk. After that, she could finally see their son.

“Nothing prepared me for what I saw: A little boy so small, his legs were thinner than my fingers, feet the size of two nickels, his body transparent, eyes fused shut and wires from endless monitors,” recalls Paloma.

Paloma immediately started pumping around the clock and soon one of the nurses started to tell her about Prolacta. She showed her one of the bottles.

“I felt hopeful as Prolacta products would be used to fortify my milk and help little Eli grow,” she added.

Their NICU journey was long. Eli had a grade 4 intraventricular hemorrhage (IVH), numerous blood transfusions, fractured ribs, a small stint in isolation due to an infection, and a patent ductus arteriosus (PDA) that resolved on its own. He spent months on a ventilator but continued to grow steadily despite the obstacles he faced.

“By early June, our sweet boy was successfully extubated. Many tears were shed, as we were finally able to see his full face. From there, things moved fast. By mid-June he started bottle feeding and then had to be switched off Prolacta’s products in preparation for him to come home. By then, he had made so much progress,” said Paloma.

After 123 days in the NICU weighing 6 lbs 4.8 oz., Eli James left the NICU a true warrior. He came home on minimal oxygen which he was completely off within weeks of being home.

As of January, he’s a happy 9-month-old baby (5 months adjusted) weighing 14 ½ lbs. He’s started solids, sits with support, rolls and loves to laugh all day. Tiny scars cover his body, a constant reminder of all his battles, and the strength he has. To this day he continues to amaze everyone who meets him, especially his proud parents.