“Premature infants are susceptible to life-threatening complications that risk not only their very survival but also their long-term health and development,” said Melinda Elliott, MD, FAAP, and chief medical officer of Prolacta. “Multiple peer-reviewed studies found that Prolacta’s nutritional fortifiers, when used as part of an EHMD, play an integral role in helping reduce rates of the most common comorbidities in these fragile infants while also improving their long-term neurodevelopment.”1,2,3,4,5,6,7,8,9,10,11,12,13

An infant’s lungs are among the last organs to fully develop inside the womb, leaving many premature infants at high risk of developing BPD. BPD is also called chronic lung disease (CLD) of prematurity. It is one of the most serious complications of prematurity and can cause respiratory morbidity, longer hospital stays, and long-term neurodevelopmental impacts. The longer a premature infant receives supplemental oxygen or mechanical ventilation, the higher the risk of developing BPD.14

Several studies have reported significant decreases (weighted average of 9.7%) in the incidence of BPD in premature infants fed Prolacta’s EHMD compared to those fed cow milk-based nutritional products.5,7,8 Another study revealed that time is of the essence: Early fortification with Prolacta’s fortifiers as part of an EHMD led to a 15% reduction in the incidence of BPD, compared with late fortification.2 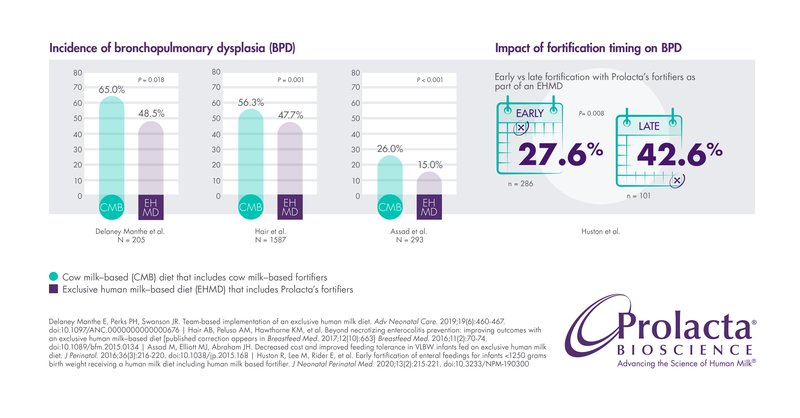 Late-onset sepsis is a dangerous systemic infection with subsequent inflammatory response and the leading cause of mortality in NICUs. It is estimated that premature infants have up to a 26% chance of developing this serious complication.5,6,7 Late-onset sepsis is associated with several potential complications, including increased ventilation use, neurodevelopmental disabilities, predisposition to other comorbidities like BPD and ROP, longer NICU stays, and higher NICU costs.2,5,7,12 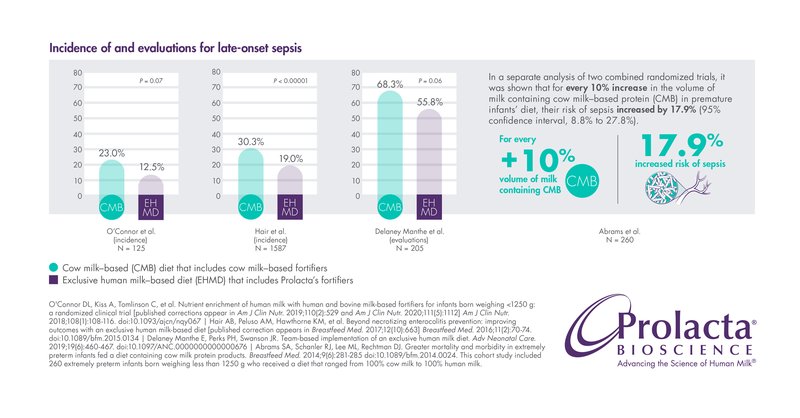 NEC is a serious intestinal disease among extremely preterm infants (those born < 28 weeks gestational age) and is one of the leading causes of mortality among these very fragile, young patients.12 NEC is especially prevalent in premature infants who are fed cow milk-based fortifiers. Mortality for premature infants with NEC requiring surgical intervention can be as high as 34.9%, and 20.3% mortality in infants with medical NEC.15

Several studies have reported that premature infants who received Prolacta’s EHMD instead of cow milk-based fortifiers have a reduced incidence of medical NEC or surgical NEC. 7,8,9,11,13, 16 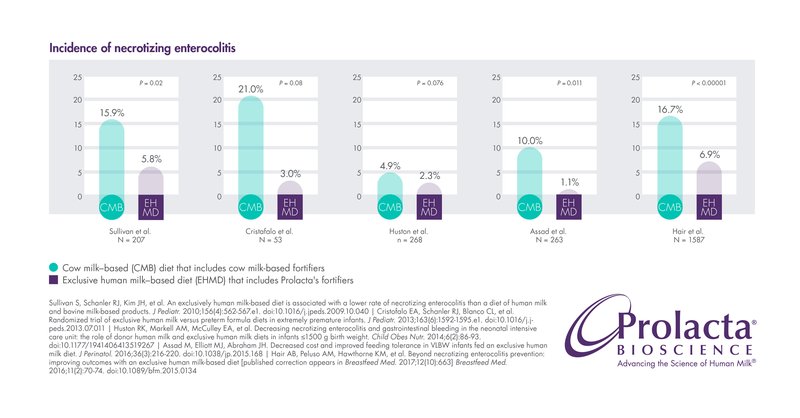 ROP is an eye disease primarily affecting premature infants that results in abnormal development of retinal blood vessels. Between 40% and 80% of preterm infants develop ROP, making it a leading cause of blindness and decreased vision in children worldwide with a direct impact on neurodevelopment.17,18,19,20

Multiple studies have shown that infants fed Prolacta’s EHMD have lower incidence and/or severity of ROP than those who are fed cow milk-based fortifiers.5,6,7 ,8 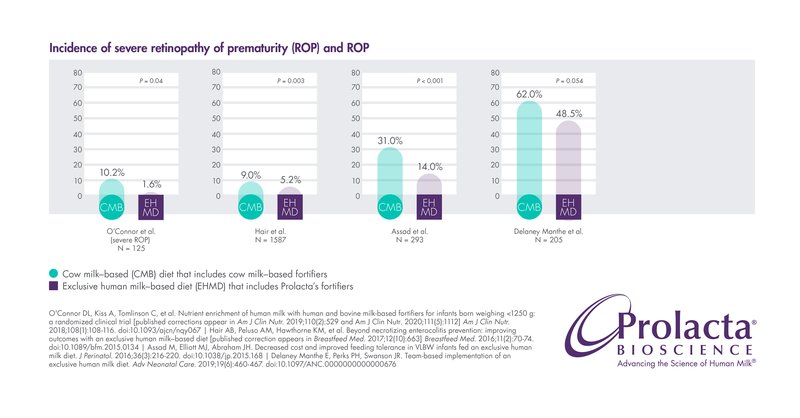 “The significant body of clinical evidence supporting short- and long-term health benefits with the use of an EHMD with Prolacta’s fortifiers is encouraging and positively impacts not only the infants but also their families, communities, and the health system as a whole,” said Scott Elster, president and CEO of Prolacta. “Addressing premature infant complications through nutrition in the NICU means getting these babies home sooner and healthier, and ultimately reducing hospital costs.”8,12 ,21

In addition to reducing the risk of life-threatening comorbidities, Prolacta’s EHMD has been clinically shown to:

The major difference between cow milk-based and human milk-based products is the composition — notably, the bioactive components that are unique to human milk. These include immunoglobulins, lactoferrin, milk fat globule membrane, and the wide spectrum of prebiotics known as human milk oligosaccharides (HMOs), which are not easily manufactured and thus are greatly decreased or missing from cow milk-based nutritional products.23 Bioactivity is thought to support infants’ immunity, development, growth, and long-term health.24

Prolacta’s 100% human milk-based nutritional products have the highest bioactivity in the human milk industry.25 Prolacta’s nutritional products are vat pasteurized using profiles defined by the U.S. Food and Drug Administration (FDA) to ensure pathogen inactivation and the highest level of safety while retaining as much of the natural bioactivity of the milk as possible.25 Prolacta's vat pasteurized products retain higher bioactivity than products processed using other methods, including retort sterilization and ultra-high-temperature (UHT) processing.26,27

Prolacta Bioscience® Inc. is a privately held, global life sciences company dedicated to Advancing the Science of Human Milk® to improve the health of critically ill, premature infants. Prolacta's 100% human milk-based nutritional products have been evaluated in more than 20 clinical studies published in peer-reviewed journals. More than 80,000 premature infants have benefited from Prolacta’s nutritional products worldwide to date.* Established in 1999, Prolacta is the world’s leading provider of human milk-based nutritional products for hospital use and is also exploring the therapeutic potential of human milk across a wide spectrum of diseases. Prolacta maintains the industry’s strictest quality and safety standards for screening, testing, and processing human donor milk. Operating the world’s first pharmaceutical-grade human milk processing facilities, Prolacta uses vat pasteurization and a patented, U.S. Food and Drug Administration-reviewed manufacturing process to ensure pathogen inactivation while protecting the nutritional composition and bioactivity of its human milk-based products. Prolacta is a global company with headquarters in Duarte, California, and can be found on Twitter, Instagram, Facebook, and LinkedIn.

Prolacta Bioscience celebrates Prematurity Awareness Month and World Prematurity Day by recognizing the contributions of breast milk donors, parents of premature infants, and the NICU teams who care for them