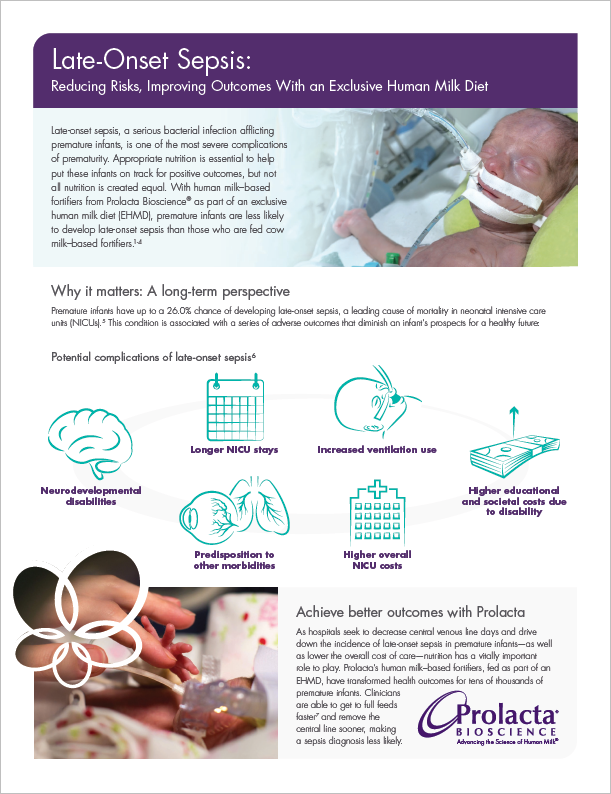 Late-onset sepsis, a serious bacterial infection afflicting premature infants, is one of the most severe complications of prematurity. Appropriate nutrition is essential to help put these infants on track for positive outcomes, but not all nutrition is created equal. With human milk–based fortifiers from Prolacta Bioscience® as part of an exclusive human milk diet (EHMD), premature infants are less likely to develop late-onset sepsis than those who are fed cow milk–based fortifiers.1,2,3,4

Why it matters: A long-term perspective

Premature infants have up to a 26.0% chance of developing late-onset sepsis, a leading cause of mortality in neonatal intensive care units (NICUs).5 This condition is associated with a series of adverse outcomes that diminish an infant’s prospects for a healthy future:

As hospitals seek to decrease central venous line days and drive down the incidence of late-onset sepsis in premature infants—as well as lower the overall cost of care—nutrition has a vitally important role to play. Prolacta’s human milk–based fortifiers, fed as part of an EHMD, have transformed health outcomes for tens of thousands of premature infants. Clinicians are able to get to full feeds faster7 and remove the central line sooner, making a sepsis diagnosis less likely.

What the research shows

Studies showed that hospitals effectively reduced the development of late-onset sepsis by feeding Prolacta’s well-tolerated, human milk–based products to premature infants as part of an EHMD.1,2,3

In a separate analysis of two combined randomized trials, it was shown that for every 10% increase in the volume of milk containing cow milk–based protein (CMB) in premature infants’ diet, their risk of sepsis increased by 17.9% (95% confidence interval, 8.8% to 27.8%).4 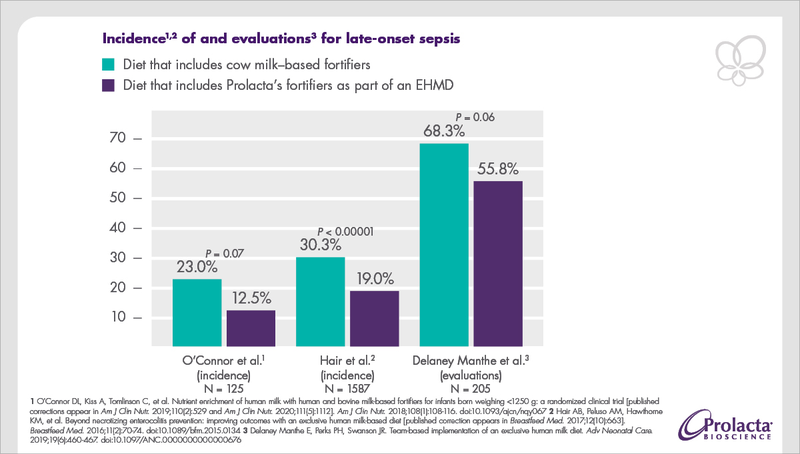 Established in 1999, we created the first and only neonatal nutritional fortifiers made from 100% human milk, rather than cow milk. Based in California with employees throughout the world, we’re a privately held life sciences company that’s touched the lives of more than 63,000 premature infants globally.11 We operate the first and only pharmaceutical-grade manufacturing facilities for testing and processing donor milk. We exceed food-product industry requirements by following stringent quality and safety standards based on those for the human blood and plasma industry.