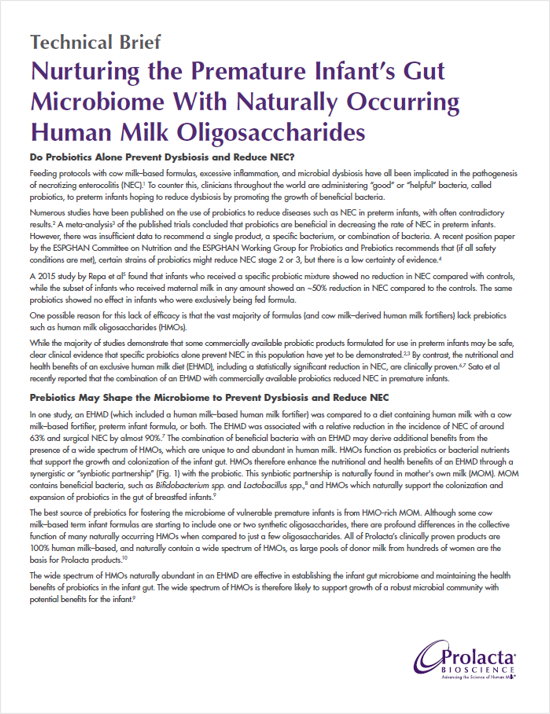 Feeding protocols with cow milk–based formulas, excessive inflammation, and microbial dysbiosis have all been implicated in the pathogenesis of necrotizing enterocolitis (NEC).1 To counter this, clinicians throughout the world are administering “good” or “helpful” bacteria, called probiotics, to preterm infants hoping to reduce dysbiosis by promoting the growth of beneficial bacteria.

Numerous studies have been published on the use of probiotics to reduce diseases such as NEC in preterm infants, with often contradictory results.2 A meta-analysis3 of the published trials concluded that probiotics are beneficial in decreasing the rate of NEC in preterm infants. However, there was insufficient data to recommend a single product, a specific bacterium, or combination of bacteria. A recent position paper by the ESPGHAN Committee on Nutrition and the ESPGHAN Working Group for Probiotics and Prebiotics recommends that (if all safety conditions are met), certain strains of probiotics might reduce NEC stage 2 or 3, but there is a low certainty of evidence.4

One possible reason for this lack of efficacy is that the vast majority of formulas (and cow milk–derived human milk fortifiers) lack prebiotics such as human milk oligosaccharides (HMOs).

While the majority of studies demonstrate that some commercially available probiotic products formulated for use in preterm infants may be safe, clear clinical evidence that specific probiotics alone prevent NEC in this population have yet to be demonstrated.2,3 By contrast, the nutritional and health benefits of an exclusive human milk diet (EHMD), including a statistically significant reduction in NEC, are clinically proven.6,7 Sato et al recently reported that the combination of an EHMD with commercially available probiotics reduced NEC in premature infants.

Prebiotics May Shape the Microbiome to Prevent Dysbiosis and Reduce NEC

In one study, an EHMD (which included a human milk–based human milk fortifier) was compared to a diet containing human milk with a cow milk–based fortifier, preterm infant formula, or both. The EHMD was associated with a relative reduction in the incidence of NEC of around 63% and surgical NEC by almost 90%.7 The combination of beneficial bacteria with an EHMD may derive additional benefits from the presence of a wide spectrum of HMOs, which are unique to and abundant in human milk. HMOs function as prebiotics or bacterial nutrients that support the growth and colonization of the infant gut. HMOs therefore enhance the nutritional and health benefits of an EHMD through a synergistic or “synbiotic partnership” (Fig. 1) with the probiotic. This synbiotic partnership is naturally found in mother's own milk (MOM). MOM contains beneficial bacteria, such as Bifidobacterium spp. and Lactobacillus spp.,8 and HMOs which naturally support the colonization and expansion of probiotics in the gut of breastfed infants.9

The best source of prebiotics for fostering the microbiome of vulnerable premature infants is from HMO-rich MOM. Although some cow milk–based term infant formulas are starting to include one or two synthetic oligosaccharides, there are profound differences in the collective function of many naturally occurring HMOs when compared to just a few oligosaccharides. All of Prolacta’s clinically proven products are 100% human milk–based, and naturally contain a wide spectrum of HMOs, as large pools of donor milk from hundreds of women are the basis for Prolacta products.10

Figure 1. Synbiotics are a combination of prebiotics and probiotics11,12,13

The Wide Spectrum of HMOs May Establish a Better Microbiome

The presence of probiotics14 and prebiotics15 are both naturally found in human milk and are known to be synergistic. Parenteral nutrition does not contain HMOs, while cow milk–based formula is practically devoid of HMOs. One or two synthetic and/or plant-based oligosaccharides have been added to some infant formula products to mimic the role of HMOs as prebiotics. The wide spectrum of naturally occurring HMOs in human milk is clearly important, as specific HMOs are metabolized by different bacterial groups, resulting in different prebiotic effects that are likely structure specific.9 Differences in oligosaccharide composition, abundance, and function between human milk and cow milk–based formula remain profound.16

"With 200+ unique HMOs in human milk, it is unrealistic to believe that adding just one or two synthetic HMOs to infant formula could have the same benefits as the diverse array of naturally occurring HMOs. While the evidence is limited, both short- and long-term effects appear to be pointing to the power in numbers for HMOs to support the development of a healthy infant microbiome," said Melinda Elliott, MD, FAAP, Chief Medical Officer, Prolacta Bioscience. This wide spectrum of HMOs may help naturally establish a robust microbial community with potential benefits for the infant, much the way MOM does.